Everytown for Gun Safety Endorses Chimene Schwach, 1 out of 4 candidates endorsed in Missouri 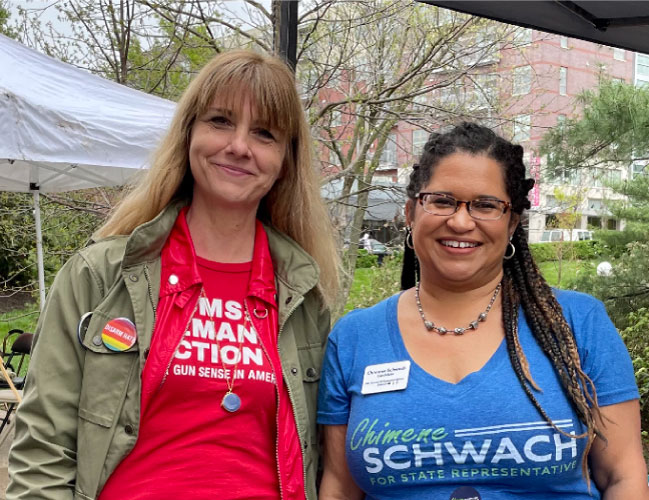 “We can’t end our gun violence epidemic without passing strong gun laws, and that requires electing strong gun safety champions,” said John Feinblatt, president of Everytown for Gun Safety. “Moms Demand Action and Students Demand Action volunteers aren’t just running for office — they’re winning. As the country clamors for action after the tragedies in Buffalo and Uvalde, we’re proud to endorse these volunteers, who are already walking the walk on gun safety.”

“Especially after the tragedies in Buffalo and Uvalde, voters want candidates who will fight for gun safety – and there’s no better proof of commitment to this issue than being a Moms Demand Action or Students Demand Action volunteer themselves,” said Shannon Watts, founder of Moms Demand Action. “We’re incredibly proud to endorse our volunteers who are looking to take the step from activist to lawmaker by Demanding a Seat at every level of government – and our grassroots army of fellow volunteers are ready to help get them elected.”

Last week, the second cohort of Everytown for Gun Safety Victory Fund’s Demand a Seat graduated from the program, hitting a milestone of 250 volunteers who have participated in the program. Last year, Everytown Victory Fund launched “Demand a Seat,” a new program that trains volunteers and gun violence survivors to run for office and work on campaigns. The program will invest $3 million in educational training and mentorship opportunities for grassroots volunteers considering campaigns at the local, state, and federal levels. Since the launch of Demand a Seat, hundreds of people have expressed interest and more than 250 people have participated in the program from 41 states, including 120 gun violence survivors. More information on Demand a Seat can be found here.